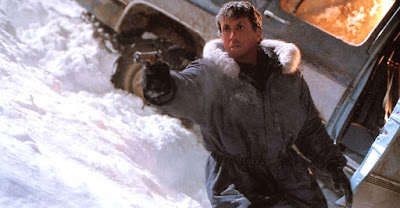 Eye See You, AKA D-Tox, was a notorious movie some 20 years ago, when it was originally supposed to come out. The film had a lot of negative buzz around it. There were reshoots galore. And, despite the presence of superstar Sylvester Stallone, the film sat on a shelf for three years until finally getting a limited theatrical release in 2002.

The film was Stallone's last starring role, other than an appearance in a Spy Kids movie, until Rocky Balboa came out in 2006. And that's too bad, as he's quite good in it.

I didn't care much for Eye See You when it came out. It's basically a slasher movie with an action hero -- albeit an alcoholic, broken one -- as the main character. This removes a lot of the tension as, no matter how proficient the killer is at knocking off the rest of the cast, we know he's basically fucked in the end. Big time.

Rambo vs slasher? The odds are far from even, no matter how drunk Rambo is.

Revisiting Eye See You recently, I found myself more forgiving. Sure, this is throwaway entertainment, but the cast is good. Tom Berenger, Robert Patrick, and Charles S. Dutton rarely disappoint. And director Jim Gillespie, who was hot off I Know What You Did Last Summer at the time, has a deft hand when it comes to the genre.

But this is still pretty unspectacular stuff. We've seen this kind of thing before, and even the presence of Stallone can't elevate it beyond it's B-movie trappings. It was a Bad back in '02, and it's a Bad now.