Having My Say: In support of out-of-shape Thor 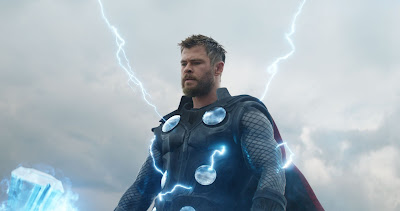 Because no movie is immune to the stupidity that is our politically correct/socially outraged culture, meg-hit Avengers: Endgame has come under fire for one of the most ludicrous things imaginable -- the "fat shaming" of Thor.

Without giving too much away for those who haven't seen Endgame (you're welcome, all four of you), the God of Thunder, as played by Chris Hemsworth, falls into a state of depression and, for lack of a better word, lets himself go. He goes from super buff to super out of shape, largely due to inactivity and alcohol abuse.

This, people, is a classic case of a depression. And who can blame him? His people all but wiped out, half the world's population destroyed, Thor views himself a failure, and gives the fuck up.

Now, light is made of Thor's physique upon his appearance. And yes, everyone in the theatre laughed. But if you're going to call this fat shaming, you missed the point.

Thor's fellow Avengers are actually supportive of their depressed and, at first, always drunk friend. They gently steer him back on course when he rambles on, and force him to confront his failures. He grows stronger again because of it. By the end of the movie he might not be physically fit again (these things take time), but he's mentally there as one of the Asgardians of the Galaxy (spoiler alert).

I've been in Thor's shoes. I've been chronically depressed, almost 40 pounds overweight, and cruising toward a diseased liver, a heart attack or a bullet. I got through it because of my supportive friends and family, who guided me back to health physically and mentally. It still is a constant battle, but I'm where I want to be.

There are big people, little people and people in between in this world, and no one should be ashamed of their body. But being drunk, out of shape, and unhealthy isn't a good thing. There is shame in that. If you see the portrayal of Thor as fat shaming, I think you missed the fucking point.