So I killed a day playing Tomb Raider... 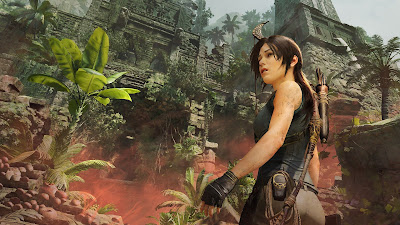 No, this isn't a review of Shadow of the Tomb Raider, as the game is already six months old and that just seems silly.

Nor is it a review of the Tomb Raider movie reboot that came out like a year ago, although it's easy to see how the movie was inspired by the game, or vice versa. However that shit works.

But it is an acknowledgment that I, a 46-year-old man, spent a day playing a video game, one that features a sexy heroine doing kick-ass stuff like raiding tombs, solving puzzles, and killing bad guys.

A wee bout of stomach flu prompted this exercise in nerding, as I'm usually the last person to spend a lazy day in front of the TV, despite what my doctor and shrink say about needing to relax more. I usually grind away on my projects believing rest comes after work.

But there was something... meditative about navigating Lara Croft through some hyper real environments. It was a hoot to slink under or over traps, climb cliffs, and sneak up on villains (spoiler alert, she's a mean machine with a knife and bow and arrow). I lost a great deal of time figuring this game out, and never once was I compelled to rage quit, which often happens when I game.

What impressed me is how much playing Shadow of the Tomb Raider felt like interacting with a movie. The game has character development, a story, and boat loads of action and adventure. Oh, and suspense too. I'm aware that's the norm in video games now, but I'm late to the party on this.

And yes, whoever they based Croft on is very easy on the eyes, be she digital or otherwise... Oh, it's Camilla Luddington? Thank you!

What's the point of this article, other than to admit I'm a man child who crushes on video game heroines? I don't think there is one, other than to point out the obvious: video games have caught up with movies when it comes to providing quality entertainment.