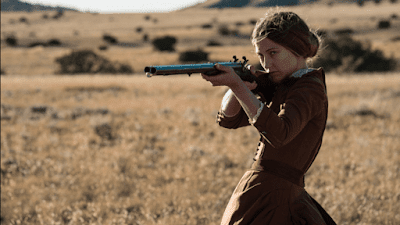 Given the superstitious nature of the era, and the wildness and isolation of its setting, the Western lends itself to a pairing with horror. These were lawless times, First Nations had many demons and spirits in their folklore, and people were willing to believe in ghosts and monsters.

There have been some good horror/Western hybrids, most recently Bone Tomahawk, and The Burrowers before it. How does the latest mashup, The Wind, fit into the mix? Stick with me!

The Wind is a slow-burn story about a frontierswoman who believes there's something evil about the land she and her husband have settled on. He dismisses her claims (what a dick!), only to have her paranoia increase when another couple settles nearby. Things go from bad to worse at this point, spoiler alert.

For the most part, The Wind is a really good ride. It's a quiet movie with stunning cinematography. Basement Dwellers, if you get the chance to see this on a big screen, it'd be worth the trip. Westerns are know for their wide-angle shots of landscapes and big sky, and this movie has all that. It's gorgeous to look at.

That being said, it's also a small story, with Caitlin Gerard's Lizzy at the centre of it. Is there really something wrong with the land? Or is everything in her head? Yes, it's one of THOSE movies, although there's enough evidence to support that everything we experience in The Wind actually happens. And yes, there's some spooky stuff going on here. Including one moment where I exclaimed "oh fuck!" out loud.

This is Gerard's movie, and she owns it. She first appeared in 2012's Smiley, and was good there, but she's awesome here. Had her performance faltered, The Wind would have sunk. She's the glue that holds this movie together.

The Wind isn't for everyone. It's largely gore free, and doesn't feature a kill or scare a minute. But if you're a patient horror fan, and willing to pay close attention, you'll have a good time. A Good for me.