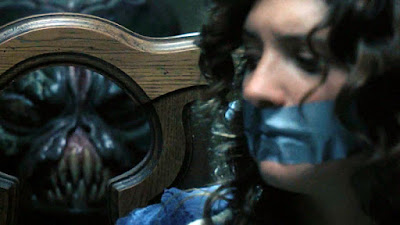 Altered is a rare bird for us in The Basement. It's a movie Shawn and I have both seen, and even discussed on the show, but never formally reviewed. That being said, it's been out for a while, but not long enough to be considered a Retro Review.

So I said "fuck it," as I'm want to do, and decided to write something up anyway. Because we can do whatever the fuck we want here in The Basement.

Altered is director Eduardo Sanchez's follow up to The Blair Witch Project. Yup, this motherfucker (and I say that with the utmost respect) waited seven years to make another movie, after the groundbreaking success of his debut. I'd say that was a smart move, as he shows here just how many chops he has as a filmmaker.

This is a pretty accomplished piece of low-budget genre filmmaking. Gone is the found footage, and in its place we have a tightly wound and claustrophobic tale of a close encounter with a very unfriendly E.T.

There's scares, gore and a consistent sense of dread that reminded me of Ridley Scott's Alien. Yup, I went there. I'd say Altered ranks right up there with that classic when it comes to movies about aliens. It's that good, and that well done, only in a different way.

Casting? Sanchez fills the film with relative newcomers, at least for 2006, but they're all good. I'd actually like to see more from Adam Kaufman, Catherine Mangan, Brad William Henke and Michael C. Williams. Each brings a sense of desperation and paranoia that works in the film's favour.

Mangan is in one of the movie's most effective sequences, as she's tied to a bed while being menaced by the alien, who has pretty much gutted (spoiler alert) one of the other cast members. It's wild stuff.

If you haven't caught up with Altered, I'd suggest doing so right away. It's one of the hidden gems Shawn and I love to talk about on our show, and a Good.