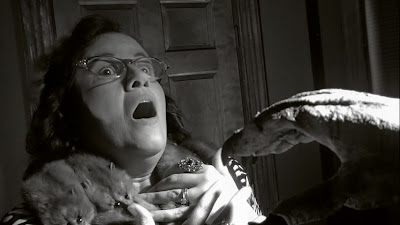 Writer/Director Christopher R. Mihm pays tribute to the works of William Castle, the master of classic horror. Rich socialites have a tradition of throwing exclusive dinner parties. This time, they've booked a spiritual medium who promises to open a portal to the great beyond. Can the group survive the night or will ignoring the medium's warning be the last thing they ever do?

Jason: I'd like to say if you've seen on Mihm movie you've seen them all. But you really haven't. Although they do tie in nicely when one sits down and watches them all. In fact, House of Ghosts has a big tie-in to The Monster of Phantom Lake. And I dug the shit out of that! There's also a reference to Terror From Beneath the Earth.

Mihm relies on a lot of stock actors for his work, but its fun seeing them pop up here and there. No Shannon McDonough though. That girl deserves to be in everything he does!

Once again, he's captured the 1950s vibe perfectly. And this is a nice tribute to the work of William Castle. I dug it for what it was, but will adjust for inflation. Back in the 50s, this would have kept me up all night. As it is now, I have to give it a Bad. But keep making movies Christopher R. Mihm!

Shawn: Welcome to the archives of the Mimniversity of Horror.

We’ve watched enough of these movies already to actually get the jokes about his other movies. Is that a bad thing, or a good thing?  I don’t fucking know anymore. I just know that, for what this guy is doing for that lost style, is wicked if you are into it!

I’m not so much a fan of the style. But of all the Mihmiverse movies I’ve seen, this one was the best. Bang on, really. I still won’t give it a Good. It gets a Bad. But, had I been alive in the 50’s 60’s era that this stuff is supposed to rep, It’d be a Good!

I think of all of them, this really captured the feel, and I even let myself in it a bit, to feel some slight anxiety in a spot or two. So did it’s job as I’ve seen far worse “Bad” categorized movies than this, for sure.

Not gonna really ramble on, as it is a simple haunted/monster house of a movie. Cool.