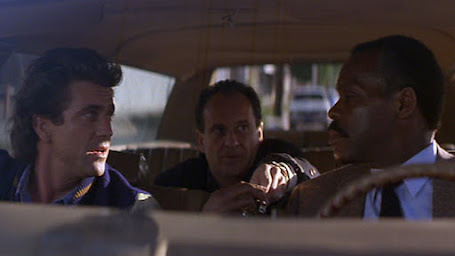 Tuesday is upon us- which means it's time or me to lock and load again as I chase Riggs and Murtaugh across Los Angeles in another action packed "Lethal Weapon" movie...

A routine drug bust by Riggs and Murtaugh goes awry- hinting that things are a bit deeper than they think.

Smuggled krugerrands, an FBI witness, and the South African consulate all collide with the two cops as they they lock sights on the biggest case of their careers...

"Lethal Weapon 2" isn't as intensely emotional as the first one.  As the two partners further cement their partnership and friendship, things lighten up a bit between the two- which is fitting as it echoes Rigg's growth from the angry, suicidal personality he was in the first movie into a more "stable" person learning to deal with his grief, and open up to Murtaugh as a friend.  It's a nice adjustment.

While Riggs gets a lot of development in this movie, Murtaugh, sadly- doesn't get as much.  He's still enjoyable to watch, but it would be nice if there was a bit of a change in direction or him.  The addition of Leo Getz, worried me a bit- as I was concerned that the slightly "wackier" character he played would overshadow and become the focus of the movie.  Fortunately, he didn't, and was used sparingly... balancing out nicely with the more straight faced and natural comedy of the main characters.

Mel Gibson and Danny Glover are- once again, great as Riggs and Murtaugh.  Joe Pesci as Leo Getz was also good.  Real credit goes to Joss Ackland and Derrick O'Connor, who play Arjen Rudd and Pieter Vorstedt- the Consulate and his right hand man respectively.  They brought a nice sense of menace to their characters that made you sneer at them, and eager to see how they would meet their ends.  Patsy Kensit as Rika van den Haas- Rigg's love interest was quite enjoyable too, and it was a little disappointing that she ultimately was simply their to help motivate Rigg's rampage of revenge.

The action sequences were on par with the first movie- with a great reference to Rigg's running down the street from the first movie.  The toilet bomb, and the trailer shoot-up were amazing and incredibly well done.  Who'd ever thing a toilet bomb could be a great way to bond, eh?

While "Lethal Weapon 2" may not has the grit of the first one, it's an enjoyable and worthy sequel.  It aims high, and hits "The Good".