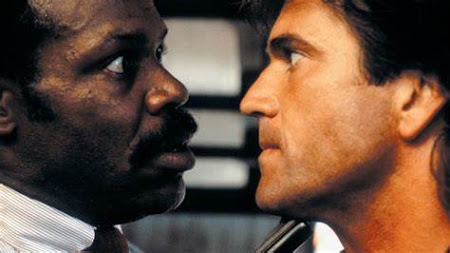 50 year old Sergeant Murtaugh has a nice home, a lovely family, a new fishing boat, and a fairly safe career...

Sergeant Rigs has a motor home, memories of his deceased wife, a risky career... and a "special" bullet for a "special" occasion...

When they get partnered up, it becomes a question of who'll get the "special" bullet in the end...

1987's "Lethal Weapon" helped to transform the Buddy Cop movie from a genre that was generally comedic to one that had action, humor, and depth of character.

The story is pretty 1980's in that it consisted of drug cartels- which was the real hot topic back then due to Nancy Reagan's "Just Say No" campaign.  But it's really only the bones from which hangs the real "flesh" of the movie- the relationship between Riggs & Murtaugh.  Their conflict, and the growth of their characters as they go through the events of the story are what really holds this movie together, and keeps you engaged from start to finish.

It helps that the characters are interesting to begin with- and prove wonderful contrasts with each other.  If it weren't for their differences, the story of they becoming partners and friends wouldn't be so interesting.  Nor would it have provided them both with room for growth.  Their different personalities and viewpoints on the world balance each other, and add a wonderful texture to the movie.

Now, it has to be said that the characters probably wouldn't be so engaging if it weren't for the performers.  Danny Glover as Murtaugh is marvelous, and Mel Gibson as Riggs is amazing.  Both performers bring such charisma, chemistry, humor, and depth to the characters.  The scene where Riggs contemplates suicide is just intense and powerful.  And Gary Busey as Mr. Joshua is crazed as always.  He's great as a bad guy.

"Lethal Weapon" helped to action-ize Buddy Cop movies- and in grand style.  The action sequences are intense and exciting.  They help pace the movie nicely, and raise the stakes as the story progresses.  They are great interludes between the more personal and dramatic moments between the characters.