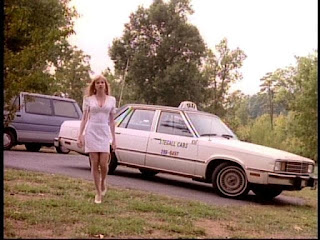 Tuesday rolls around with clear skies, clear lakes, and clear highways.  Along the long stretches Smokey can be found chasing the Bandit... and adventure follows close behind.

After his uncle passes away, Bandit finds himself helping a beautiful widow keep their carnival afloat.

But all is not as it seems with this carnival.  It hides a secret... a shiny, glittery secret that others would kill to keep for themselves...

"Bandit: Bandit's Silver Angel" sees the 1990's TV movie series based on the original "Smokey and the Bandit" films come to a close.  And to be honest, it wasn't a bad send-off for the series.

Brian Bloom once again brings a pleasant charm and playfulness to the character of Bandit.  While Donald O'Connor didn't get a lot of screen time, he brought quite a bit of humour to his character as Uncle Cyrus, and gave a solid impression that he's one of the few characters that could easily outwit Bandit.  Traci Lords in the role of Angel, sadly felt a little flat and emotionless at times- which is a shame because she's actually not that bad of an actress.

I also want to compliment David Lenthall as Sheriff Clanton, and Deacon Dawson & Jeffrey Pillars as Deputies Joe and Ed respectively.  Lenthall brought a fun energy to the character that had some nice echoes of Boss Hogg and Sheriff Roscoe from "The Dukes of Hazzard".  Dawson and Pillars were great as a comedic duo.  Their nonchalance when interacting with both the Sheriff and the Bandit made me smile every time.

While "Bandit: Bandit's Silver Angel" may not be a great movie, it is still an enjoyable example of television entertainment.  Watching this installment, I was actually kinda sad that this series had to come to an end.  I would've liked to have seem more adventures of Bloom's version of the Bandit.  I'm giving this one a "Good".