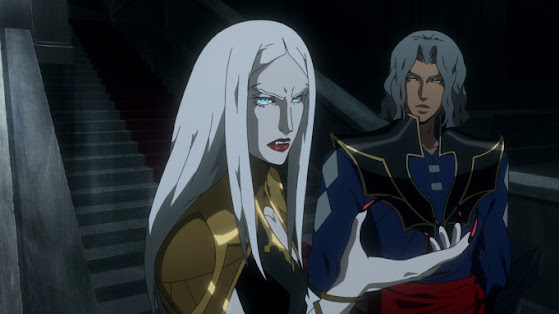 Seeing as the Castlevania animated series has recently concluded, I thought it apt to give my thoughts on the series as a whole.

I'm not going to lie, I have mixed feelings about the show. For me, it would often flip-flop between interesting and bland. It had some intriguing concepts and characters throughout, but these would often be overshadowed by a meandering and haphazard plot.

There were many subplots that were underutilized, misused, or straight-up abandoned by the end. The Infinite Corridor, for example, is a plot point that's given a lot of build up in Season 3. It gets well established, a character's fate gets tied to it... and it's turned into a useless footnote in the last season.

It seemed like the show's mission statement would change from season to season, so established plot threads would have to be re-woven to accommodate. Regardless, this show is still a good watch, and there is some splendid animation by the end. I'd still call this series a Good.