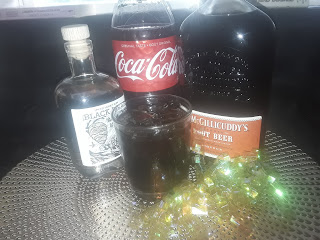 The sun is shining down on me as I sit on my balcony- feet propped up and enjoying the scenery.  By my hand is this week's tip and sip... a Super Root Beer...

All you need to make this drink is some ice in a tumbler, an ounce o spiced rum, and  ounce of root beer schnapps, and some Coca-Cola.  For this, I used Black Bear Honey Spiced Rum by Divine Vineyards.

I found this drink to be okay.  Not great, but not shit either.  It just kinda is.  It does taste like root beer- though a bit sweeter due to the honey based rum.

But in all honesty, the flavor and the effect could've been done with fewer ingredients.  Two in fact.  Root beer, and rum- or the root beer schnapps even.  Less fuss and muss.

I don't think most bars have root beer schnapps... nor do I think most pubs do.  I also don't think most people think of having a bottle of it around.  Due to that, this isn't really a drink you're likely to find being made in many places.

The taste is okay- but could be made shit simple.  I'm going to have to put it in the "Ugly".