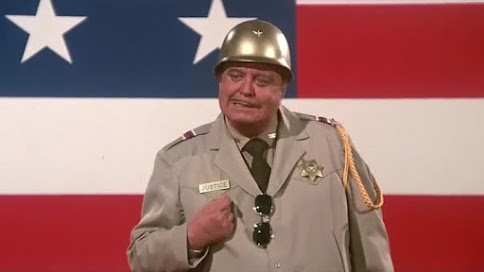 It's Tuesday once more, and the Bandit's on the run again... or is he?

All you need to know about the plot is that it's the same as the first and second movies.  Person A has to deliver Item 1, while trying to avoid Person B.  This time, it's Sheriff Buford T. Justice delivering a giant plastic fish while keeping the Bandit from stealing it.

You read that right: a giant plastic fish.

Because Burt Reynolds was smart and didn't really want much to do with this movie.

Too much the same actually.

Jackie Gleason and Jerry Reed put in great performances though.  Since Jerry Reed was originally supposed to play the Bandit in the original (before they got Reynolds), it was kind of neat to see what his version would've been like.

But their performances- and Reynolds' cameo at the end, weren't enough to lift this movie out of the formulaic tar pit that it found itself in.

I kind of wish this was the end of the road for me in regards to this franchise.  Spoiler though: there are four more to review.