Marcus Flor vs Hearts of Darkness: A Filmmaker's Apocalypse 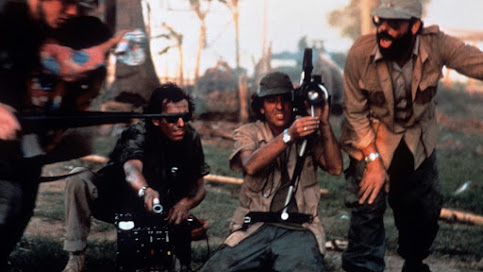 It's rare to find a movie as haunting and darkly profound as Apocalypse Now. It's even rarer to be able to see how such a film is made, in raw and intimate detail.

Hearts of Darkness: A Filmmaker's Apocalypse documents the turbulent production of the anti-war classic, and its ambitious director's slow decent into madness. It's probably one of the best filmmaking documentaries I've ever seen. It captures the fluid chaos of making a movie, and how that experience bleeds into the final product.

This documentary is both inspiring and horrifying for an amateur filmmaker to watch. You see director Francis Ford Coppola pushed to his limits, unwilling to give up on a movie that had a chance of being truly great. In some way, I understand that parasitic obsession, and the toll it can take on its host.

Documented by Elanor Coppola during the production, this film is also incredibly personal. It's not just a record of technical chaos, but an investigation of the director's soul. Just like the characters of his movie, Francis must face the darkest parts of himself to achieve his goal.

In the end, this film is as poignant as the masterpiece its documenting. I highly recommend a back-to-back viewing with Apocalypse Now, as the two film are really two side of the same coin. This one is definitely a Good.