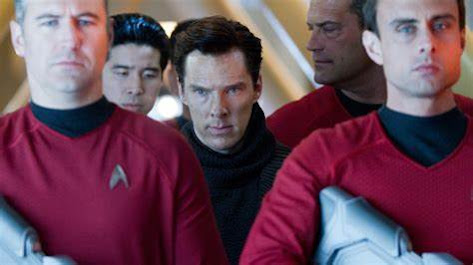 Much like the ways the constellations travel across the sky in a regular rhythm, Tuesdays flow across the calendar with steady certainty.

Which means it's time again to warp across the galaxy with another "Star Trek" movie.  This week we  beam into 2013's "Star Trek Into Darkness".

A mysterious stranger has declared war on Starfleet.  His capture by the crew of the Enterprise thrusts Kirk, and Spock into the middle of a conspiracy... One that could destroy Starfleet and give rise to one of Kirk's greatest foes...

This movie takes the kinetic energy of the first one and builds on it beautifully.  It is fast paced, exciting, and fun.  There is also a lot more dramatic moments in this one as well, which I absolutely loved as it only served to add to the humanity of this version.

It was a joy to see how Kirk and Spock grew as characters in this movie.  Not just as individuals- but as friends and comrades.  This movie really added a lot of depth to them.  I found myself wrapped in their continuing evolution, which helped time to stop as I grew more and more engaged by the characters and the events they were going through.  Seeing Spock learn how to express the human side of his personality- that it's okay to express his affection, fear and loss was especially satisfying.  The scene on the ship as they headed to Kronos was just a marvelous piece of character development for instance.  Just a wonderful scene.

I had some worries about Cumberbatch as Khan.  Given that the character was generally accepted being of Sikh heritage (despite having been played by the Hispanic Ricardo Montalban).  I wasn't sure if having a white actor portraying such an iconic character (and one of the greatest sympathetic antagonists in Star Trek history) was a good direction.  While I would've preferred an actor of appropriate heritage, as a Star Trek antagonist, he did a great job.

My only other concern was the possibility that they would rely on revamping other storylines and characters from the Prime Universe.  I felt that if they did, it would only turn them into gimmicks, and cheapen them.  Fortunately, the next movie would help to calm those concerns.

While I did have some concerns about this movie, I would absolutely recommend it.  I'm putting it in "The Good".