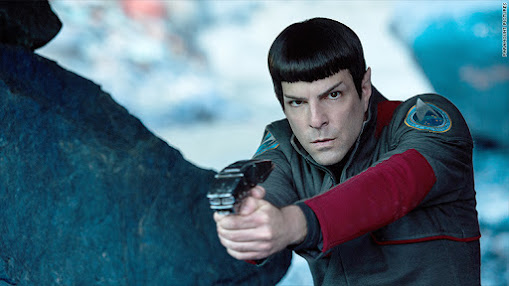 The time has come.  This week's review sees the end of my time among the stars.  But this installment takes me beyond "Star Trek"...

After three years in space, Captain Kirk is feeling a lack of purpose.  After an attack on the Enterprises maroons him an his crew on an uncharted planet, Kirk must reunite his crew and find out the source of the the attack.

What he finds is a tragedy from the past... one that can destroy the future...

One of my concerns with "Star Trek Into Darkness" was that the franchise was going to rely on re-imagining classic "Star Trek" stories.  Fortunately, this movie took the franchise into a different and exciting direction.  The story is face paced, and mixed nicely with humor and drama.  I was engaged from start to finish.

I loved that this movie spread character development among the other characters, rather than focusing the entire movie on Kirk and Spock.  I especially enjoyed the scenes developing Scotty.  The scenes with McCoy and Spock were always really enjoyable, and brought some nice depth to their friendship.  It would've been nice if Sulu, Uhura, and Chekov had gotten more development.

As with the first two films, "Star Trek Beyond" is a visually kinetic joy ride of action and excitement.  The camera work and editing helped to create a well paced and emotionally engaging story.

Amid back and forth rumors about a new "Star Trek" movie being made, I'm willing to re-watch "Star Trek Beyond" with little hesitation.  An absolute "Good".