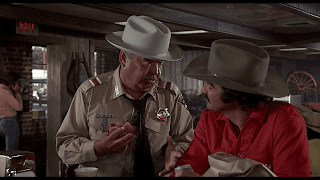 The past few franchises that I've reviewed haven't exactly been what could be called "light entertainment", so I've decided to visit a one that's a lot more lighthearted and not too heavy.

"Smokey and the Bandit".

I can hear you saying, "Wait- two movies does not a franchise make!".  I'd absolutely agree.  But since there are in fact SEVEN movies in this series, it can be considered a franchise.

Yes... seven.  So, let's hit the pavement and put the pedal to the metal.

While assisting to transport beer illegally across the country (as part of a bet no less), Bo comes across Carrie in a wedding dress stranded on the side of the road.  Giving her a ride, he doesn't suspect that she's being pursued by the local Sheriff... a man that'd pursue his target across the country if it meant maintaining his honor and authority...

This is a cheerful and fun "outlaw cowboy" type of movie that is great for just sitting, relaxing and forgetting your troubles.  The story isn't deep or thought provoking- but it is sufficiently tight enough to give a skeleton to hang the word play, one liners, sight gags, and almost "Road Runner & Wiley Coyote" like car chases.  This movie knows it's meant to entertain and pass the time, and it does it quite well.  There were many moments were I chuckled, laughed, and chortled.

The characters aren't deep either, but are enjoyable archetypes nonetheless.  You've got the cheerful and good hearted "outlaws" in the form of The Bandit and Snowman, the fiesty damsel, the determined but antagonistic Sheriff with his dimwitted deputy son.  We cheer for the "outlaws" against the authority figure.  This is helped by the fact that Sheriff Buford T. Justice is openly sexist, racist, and anti-LBGTQ+ in addition to his being overbearing with his power and authority.  It's cathartic and satisfying to see him get outwitted and outplayed by the protagonists.

A great use of these character archetypes, and very effective in entertaining me.

Of course, the characters would be nothing without good performers in the roles.  Burt Reynolds, was perfect in the role of "The Bandit".  He brought such charm and wit to the character, along with a fantastic look.  As Sheriff Buford T. Justice, Jackie Gleason was amazing.  He was funny, while also bringing just the right amount of ignorance and intolerance to make him a worthy antagonist- and to make his comeuppance all the more satisfying.  Sally Field as Carrie, brought the same sort of charm, wit and energy to the role as Reynold did to his.  She blended innocence and daring in a wonderful way, creating a character that was a great balance to that of The Bandit.

I also want to mention Jerry Reed in the role of Snowman.  He was originally supposed to play The Bandit (and he does in the 3rd movie... but we'll get there later), until Reynolds- who was THE top star at the time said he wanted to play the role.  He does a magnificent job in this supporting role.  His small scenes were really quite enjoyable and funny- adding a nice layer to the car chases and flirtatious scenes not directly related to the Sheriff and The Bandit.

The music also needs to be mentioned.  There are a couple of song that stick out for me.  The song, "The Legend", which plays during the opening credits help to establish the character of The Bandit before we even meet him.  Also, "East Bound and Down" is a great truck song as well, and is more well known than the previous one due to it becoming Reed's signature song during most of his performances.  They both helped to add to the outlaw/trucker motif of the movie.

In the final analysis, I really quite enjoyed "Smokey and the Bandit."  It's a movie I could sit down and watch when I just wanted a light hearted chuckle- or as background noise while puttering around the apartment.  It gets a big rig "Good" from me.

Give "Eastbound and Down" a listen!