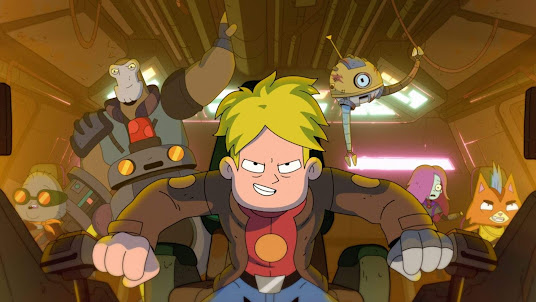 There's nothing I appreciate more than a series blindsiding me with its quality. This is what happened to me while finishing Season 2 of Final Space, the sci-fi/comedy series created for TBS and the Cartoon Network.

At first glance, this show appears to be just another raunchy animation that's trying to shock you with cynical humour. However, after a few episodes, it becomes obvious this series has more than a few tricks up its sleeves. Dare I say, this has become one of my favourite series!?!

You see, Final Space shares a lot in common with its main character, Gary Goodspeed. At first, he seems like an incompetent goofball. But he grows on you. Soon you realize the humour is just a front for a whole range of emotions and themes just beneath Gary, the show's, surface.

Funny enough, Gary grows on you like all the characters on display. At first, everyone appears to be a stereotype. But the hidden layers of each character unravel as we spend more time with them. For seeming childish at first, Final Space is surprisingly adult with how it tells the story of its characters.

Now, don't get me wrong. There are definitely moments where the comedic side and serious side of this show don't jive. However, once you get used to the show's rhythm, I think you'll have fun with it. I wholeheartedly dub Final Space a Good.