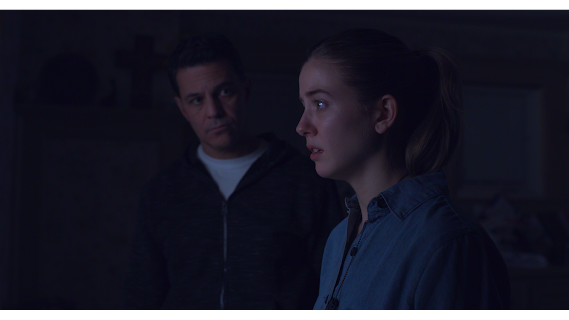 Just when we thought we'd seen it all in the world of demonic-possession movies, Know Fear comes along and gives us something a little bit different, and there is much rejoicing.

The twist to Know Fear, which features a family doing battle with a nasty demon after mom Amy Carlson is possessed, is a ritual used to do battle with the beast. The ritual allows one person to see it, one to hear it, and one to understand it's language. So it's up to niece Mallory Bechtel, nephew Jack DiFalco, and husband David Alan Basche to take the ghoul on.

This play on the standard tropes works well, even when the characters pull a DMC and separate for a reason I can't even remember. But the movie redeems itself with some genuinely creepy moments, a surprising amount of gore, and some very good acting, which is anchored by David Alan Basche's strong turn in the husband role.

Know Fear would've benefited from one last rewrite before cameras rolled, and a slightly bigger budget. But director Jamison LoCascio knows his way around a horror movie, providing great atmosphere and staging his scares well. And once again his cast, especially Basche and Bechtel, do solid work. Shawn and I recommend this one for horror fans, as it's a Good.

Know Fear is out now on DVD and On Demand.