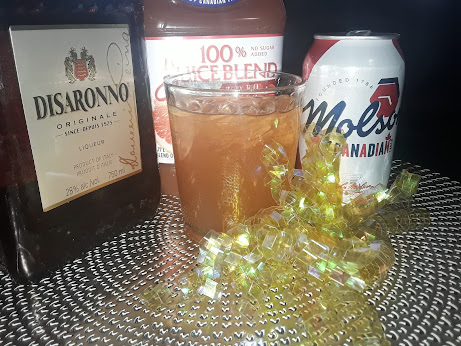 It's time once again to kick back and have a tip and sip in my cozy corner as I bring you a new cocktail to try.  This week is something called "The Brunch Box"...

The recipe for this drink calls for 1 oz of amaro liqueur (such as Disaronno), 1 oz of grapefruit juice, and 5 oz chilled lager (such as Molson Canadian).  In order to fill a standard short tumbler, I had to double the recipe.

I'm actually at a bit of a loss at how to describe this beverage.  I was surprised by how oddly neutral the taste was given that it had grapefruit juice and the orange tasting Disaronno.  It was slightly fizzy from the lager, but strangely tasteless.  I was puzzled enough by this flavor anomaly that I'm tempted to play around with the proportions of ingredients- or use an stronger type of beer, such as an ale.

While it was a curious drink, I honestly can't say that I would try it again- or recommend it.  I don't know when I would have a desire to have it.  It's not a bar or pub type drink.  It's not a party type drink either, and I can't see myself making it at home on a whim, or because I'm in the mood for it.

Because it lacked any sort of significance as an experience, I have to give it an "Ugly".