Review: On the Trail of Hauntings Ep. 2 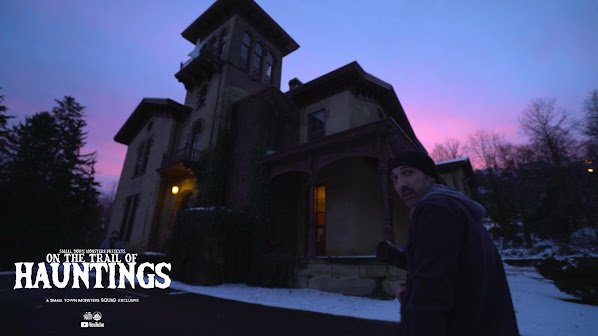 The second episode of Small Town Monsters's webseries On the Trail of Hauntings opens with the crew chowing down on a pre-investigation snack and talking about whether or not they even believe in ghosts and hauntings.
This is a fitting start given what transpires during the next 35 minutes, as the team investigates the Anchorage Mansion in Ohio, a heritage home with its fair share of alleged paranormal activity. The spirits of dead children are said to manipulate toys and even touch people, a spooky old man (dead of course) peers in at folks while they use the washroom. You get the idea.
As with the first episode, and as is generally the case with paranormal reality programming, the first half of the episode is digging into the building's history and the alleged encounters. The second half has to do with the team investigating on site, in the dark, trying to make contact with the spirits and catch something -- anything -- on camera.
What sets On the Trail of Hauntings apart from most other paranormal shows is Seth Breedlove and company aren't out to hit you with false scares or manipulate the viewer into thinking anything more is going on other than what's clearly on camera. Episode 2 is even more so successful than the first one in that regard because, for the most part, they don't get jack (spoiler alert).
As someone who's conducted many a paranormal investigation, and has his own YouTube series on the subject, I really appreciate and enjoy this approach. And now that we're getting to know the crew and their personalities, I'm starting to enjoy the humorous way these guys and gals go about what they do, and the lengths they're willing to go to make contact.
On the Trail of Hauntings is a fun foray into paranormal television, and continues to be a breath of fresh air in the genre. Episode 2 is a Good, and I look forward to the next instalment.