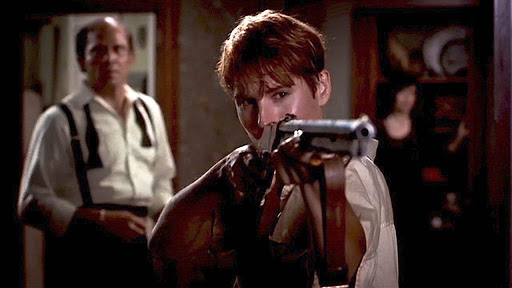 Man, am I late to the party on this movie. But judging from how much discussion there currently is about it, so are most people.

Now, I've brought up remakes a few times, mostly talking about how mediocre they tend to be. But I'd venture to say the 1990 version of Night of the Living Dead is one of the best I've seen in a long time. This version takes elements of the original and greatly improves upon them. With everything from the acting to the directing being so consistently on point, I may even go so far as to say this remake is better than the original.

Let's start with the directing, which comes from the King of Splatter himself: Tom Savini. Rather than do the obvious thing and prioritize the gore, Savini instead focuses on the story and its characters. He gets the right emotion for each scene, using only the elements necessary to really land each moment for the audience.

This lean directing style flows perfectly into the acting, which is sooooo much more believable this time around. I'm sure Savini told his actors to give it their all, because (almost) everyone here is acting his or her heart out. The performances really bring an intensity to this movie; showing us the chaos of the situation and how most people would react to it.

I'm not sure why I don't hear about this remake more often, as I enjoyed the hell out of it. More than likely, it's because this version had a troublesome production and Tom Savini had to cut a lot of stuff out for the final release. It's a damn shame, because if this is his rough draft, imagine what the final version would've been! Regardless, this one is definitely a Good.