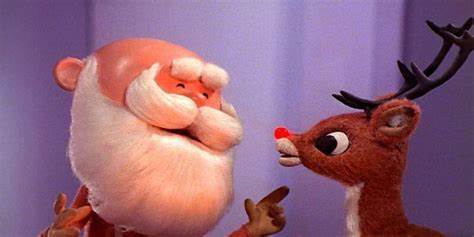 The holly jolly season is upon us!  And that means that the Christmas specials are going to start floating across the airwaves to our TV's.  Families will sit down together, sip hot chocolate and watch them- or they'll have them playing in the background while decorating the Christmas tree.

Some holiday specials are more "special" than others.  They have a warm, cozy, firelit place in our hearts and lives.  As 2020 comes to a close, we need the coziness that such nostalgia, and routine brings to our upturned lives.

And I'd have to say that, of the specials out there- the ones by Rankin-Bass are probably at the top of list of heart warming childhood cheer.

This week, I'm going to review the very FIRST Rankin-Bass Christmas special- the one that kicked off a long history of being part of the closeness and traditional Christmas viewing: 1964's "Rudolph the Red-Nosed Reindeer"!

This special was based on the 1939 poem by Robert Lewis May (which his brother turned into a song later).  The story, like the poem, details the adventures of a young buck named Rudolph after they're mocked by the other reindeer for his red nose that lights up.  When Christmas is in danger of being cancelled due to thick fog, Santa notices that Rudolph's nose could be of use- and asks him to guide the sleigh.  The rest is history.

It's not a deep story by any stretch of the imagination- but is full of whimsy and wholesomeness.  The message is a very positive one about self-acceptance, and that we all have special skills, etc that make us a valuable part of the community/family.

The characters of the Rankin-Bass special are actually pretty engaging... though I must confess the idea to make an elf want to be a dentist was a direction I didn't see coming when I was a kid.  They are cute, and cheery- just what we need at Christmas.

For it's time, the stop-motion animation was genius- and only served to bring a special charm to it.  While it's not as smooth and slick as "The Nightmare Before Christmas," it doesn't stop you from allowing yourself to escape to the magical world of Rudolph and Hermey the elf that wants to be a dentist.

And of course, we can't forget the music.  There are some marvelous songs to add to the mix.  "Rudolph the Red-Nosed Reindeer," "Holly Jolly Christmas," and  "Silver and Gold" all sung by Burl Ives bring a nice warmth and variety to the special- as does my personal favorite- "We're a Couple of Misfits" sung by Billie Richards (Rudolph) and Paul Soles (Hermey).

I find that it doesn't really feel like Christmas until certain specials are on the air- with Rankin-Bass's "Rudolph the Red-Nosed Reindeer" being one of them.  A holly jolly "Good" in my stocking for sure!