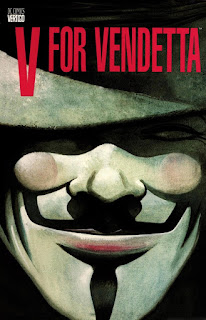 There was a time when comic were "just for kids".  As time went by, and those early comic kids grew up to write their own comics, the stories, themes, and artwork became more mature- and suitable for adults as well as children in many cases.

One such comic is, "V For Vendetta".

Amidst the population's fear and resignation, a lone masked stranger rises up against the Government... and reminds the British that a "Government should be afraid of the people... not the other way around..."

If you're a comic collector, you'll probably have this on your "Must Have" list of comics.  Written by Alan Moore, with artwork by David Lloyd, the story is mature, and well crafted.  It projects a believable- albeit horrid future that is quite relevant given some of the things that have been going on in the world these days.  It moves at a quick pace, and weaves multiple story threads together seamlessly.

The characters are also masterfully done.  The main protagonist, "V" is engaging- while also being mysterious.  This is fitting for a character is very much meant to be a allegory and symbolic.  The overt symbolism of "V" sets in motion the plotlines of the other two protagonists.  In fact, the story is more about them, than "V" himself... as is again, fitting for a character that's more symbol than person.

All three protagonists mesh together beautifully.  They are engaging and relatable- capable of pulling you into their lives and trials, while also making you cheer and root for them. 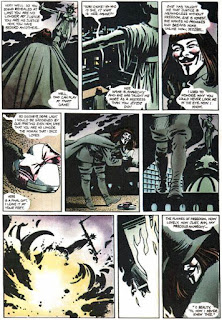 As you can see from the sample above, the artwork is simply amazing.  It's stylish, atmospheric, and visually compelling.  The colours are muted and shadowy- reflecting the mood and tone of the story, setting, and characters.  The use of shadows and "negative space" is nicely balanced, and combines with the panel layout to create a flow and pace that is both easy on the eye, and imagination.  Many of the panels are iconic enough that you could probably frame them and hang them up in a "comic cave" as artwork.

The combination of a relevant, mature story, compelling and relatable characters, and gorgeous artwork sets the stage for one of the most iconic, and most sought after comics made.  I'm giving "V For Vendetta" a Good.