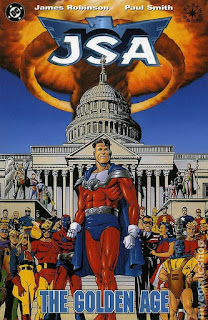 When discussing superhero comics, you inevitably wind up discussing where it al began- the Golden Age of comics, and the colourful characters from that era of the 30's and 40's.  It was a time of innovation in comics- the proliferation of all sorts of superheros, fantastic adventures, the introduction of continuity within comics, and the advent of superhero groups... with The Justice Society of America being the first of them all...

World War II is over.  Hitler is dead.  The world is celebrating.  But an evil is stirring in American.  An evil hidden in the mists of one man's memories.  As a new hero rises to inspire the nation, will they be able to stop the darkness from spreading... and stop the end of the Golden Age?

This graphic novel takes the bright, colourful, optimistic world of the Golden Age comics, and inserts some more grounded elements.  The world isn't as sleek and shiny as they were in the comics.  There is a touch more menace and reality to it.  It moves quickly, and balances suspense, action, humour, and drama in a delightful way.

The characters are also given much more depth than they had when they were first created in the 1940's, etc.  They are flawed, human, and very relatable.  I loved how this book was able to utilize such a large cast of characters effectively, while keeping them all interesting and unique. 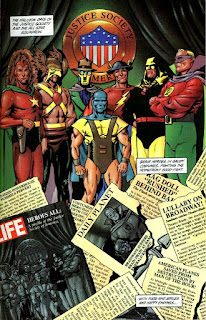 The interior artwork is absolutely gorgeous, while still maintaining the stylistic look of the original comics.  I loved the panel layouts, and the composition of the panels.  The story is enhanced by the marvelous way the artists play with the colours, and flows from bright to dim and back in a nice flow.

While, this book is certainly one of DC Comic's lesser known ones, it is one of my favorites.  If you're a fan of Golden Age comics, or The Justice Society of America, I would absolutely say this book is worth a read.  A shiny "Good" from me.