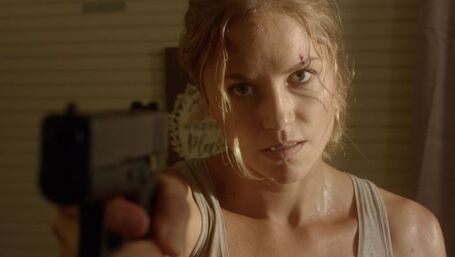 All those alleged "woke" filmmakers who are trying too hard to craft genre films that preach equality need to stop and make movies like Army of One instead.

Here's a flick that ticks all the action-movie boxes, but does so with a simple twist. At first, we get the usual tropes of a tough-guy cop having survived a harrowing -- and near deadly -- case. To unwind, he and his wife take a vacation, only to run afoul of a band of backwoods drug dealers and be left for dead.

Sounds like a lot of 80s action movies, doesn't it. So what's the twist?

The titular Army of One is the cop's girlfriend, and she ends up kicking ALL the ass. Spoiler alert.

Ellen Hollman of TV's Spartacus co-wrote, co-produced and stars in Army of One. And she ranks among the best action heroes around, more than keeping up with the likes of Charlize Theron, Sigourney Weaver, Angelina Jolie and all their male counterparts. This is a low-budget flick, so she's doing all her own fight scenes, stunts, and gunplay. And she's 100 percent convincing.

It helps that Ellen is literally married into the 87eleven Action Design team behind such epics as the John Wick and Deadpool franchises. This means she had the best in the business training and working alongside her during the shoot, and it shows. In terms of action, Ellen and her movie got more than enough bang for its buck.

So much so she outshines the rest of the film. Mind you, no one was trying to break any new ground here. The bad guys are really bad, and their leader is a particularly nasty lady named Mama, who is well played by veteran TV star Geraldine Singer. We get the required chases, fistfights and gun battles, all of which are well staged.

It's Ellen who really shines though, and we're stoked she's starring in the upcoming Matrix sequel. Hopefully it gives her the push to superstardom she's deserves. Army of One is a Good, but she's a Great!

Army of One is out tomorrow on DVD, Digital and VOD.