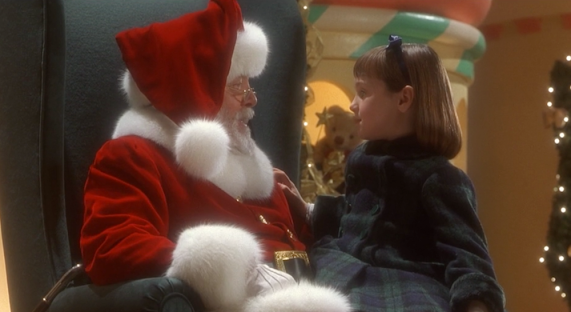 Miracle on 34th Street always stood out to me as one of the stranger Christmas classics.

It's always seemed like a movie trying to be two things at once, but not really succeeding. The Christmas half of the film, and its courtroom components, don't quite mesh and are often at odds with one another. It doesn't help either side of the coin aren't executed that well.

The most egregious portion is the courtroom drama, as it's absurd. Absurd in that the main issue is whether or not Kris Kringle is actually Santa, and not  the assault that spawned the trial. Plus the "proof" the defense uses to win is the weakest reasoning possible, especially hearing it from the mouth of a judge.

The less egregious portion is the sentimental Christmas stuff, which I found a bit too hollow. It's theme of "Christmas belief" is pretty much the same as every other Christmas movie, and only works from a child's point of view. I'd be fine with that, but this version of Miracle on 34th Street is clearly made for adults, what with the trial and business talk.

However, I still recommend this one for Richard Attenborough as Santa Claus. He is the best thing about this movie, and will get you in the Christmas spirit. A shame the rest of the movie wasn't on his level. I'd say this is still a Good though.