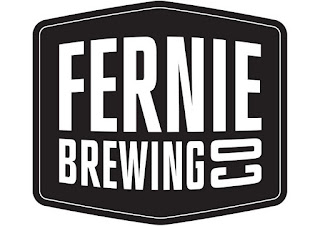 One of the surest ways to know that winter is here is when the air feels crisp and tingly, and when the snow starts to fall around you in lazy flakes of soft fluffiness.

And when beer companies actually put the word, "Winter" in their beer names...

The label for Fernie Brewing's Black Mammoth Winter Ale is simple and well balanced.  The colours are soothing and relaxing- while also hinting at the chilly winter weather.  The stark mountain side in the background is a strong foundation for the text and the company's logo crowning it.  While it is a nice label, I found it kinda boring and plain at the same time.

To be honest, I would've preferred the label used in the picture below... especially the beautifully drawn wooly mammoth on it. 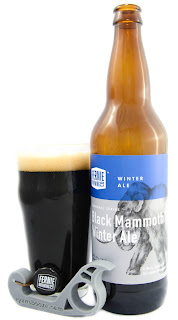 The brew itself is a deep, rich, coffee-like brown that borders on a stout brown.  It looks thick and strong.  The head of foam doesn't stay very long, but it's a wonderful light, creamy off-white.

The first sip was a light tap of flavour on the tongue- as was each sip after that.  It certainly hinted at it's strength of 8%, but didn't bash you over the head with it.  It was a gentle shake of the hand hello, with undertones of chocolate and orange to it.  At times, I thought I caught hints of oatmeal as well- which I thought was a nice balance to the sweeter aspects of the ale.

I certainly enjoyed this brew, but found that it went down too quickly.  It's not a beer where you sit, sip, and think back over fond memories of catching snowflakes on your tongue as a child, or checking out Christmas lights on the houses with that special someone.  I would've liked for it to have given me pause to just relax and drift like the snowflakes outside my window.

I would certainly take a break from chores to enjoy Fernie Brewing's Black Mammoth Winter Ale though, so I'm going to give it a "Good".