The Book Nook: "The War That Ended Peace" (Margaret MacMillan) 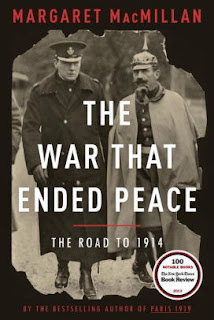 As October fades behind us, November looms ahead of us- and a day of Remembrance marches our way.  On November 11, people around the world will mark the end of World War One, and pay tribute to the soldiers that have given their lives so they can live in Freedom.

But how did the world get plunged into a war that spanned the globe, and cost humanity more than 18 million soul?  School teaches us a fairly simplified version of the events that pushed us down the road to violence, while Margaret MacMillan shows us the web of events, cultures, personalities, fears, and ambitions that inevitably lead to the "War to End All Wars".

"The War That Ended Peace: The Road to 1914" by Margaret MacMillan is a fascinating dig into everything that conspired, contributed, and combined to the initiation of the Great War.  She doesn't just investigate and describe the events- such as the "primary" trigger of Archduke Franz Ferdinand, but also the personalities of the leaders that tried to both avoid conflict... and those that pushed for it.  Into this already interesting web, she adds the national fears of the various countries edging toward open violence, and the politics behind those fears.  MacMillan discusses the ethnic and cultural issues that comprised the Austrian Empire, Germany's desire to be seen as a true global player, and the UK's slowly crumbling empire.

This book is full of detail and insight into everything that went into the start of a war that ended a long period of general peace.  MacMillan treats all those involved with equal objectivity, while still creating a vibrant portrait of the time period and those that walked the road to 1914.  It's a thick book at roughly 645 pages.

Ultimately, this is a book about the tug of war of human emotion and inhuman politics.  Choices made, and choices avoided.  Preventing a war that tore the world in half, and running into the fray with swords drawn.  Lessons in bravery, and lessons in cowardice.

If you are a student of history- especially as it relates the the First World War, I suggest you grab Margaret MacMillan's book, "The War That Ended Peace: The Road to 1914", and give it a read.  It's a page turning "Good".