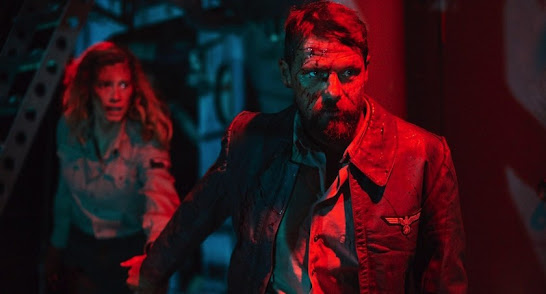 Set during World War 2, Blood Vessel finds a mismatched group adrift after a German U-Boat sinks their ship. Fortunately, their life raft drifts upon a seemingly abandoned Nazi naval vessel, and our heroes climb aboard. They slowly realize they're not alone, and I'm sure you can guess what's waiting for them...

A movie like Blood Vessel doesn't need to be anything more than good, gory fun. And, for the most part, writer/director Justin Dix succeeds on that level. Sure, some of the writing is off, and the performances a bit over-the-top, but we're not watching this expecting Oscar bait. We want vampires killing people on a Nazi ghost ship, dammit, and that's what we get.

The vampire design is very cool, the bloodshed plentiful enough, and there's some good characters. We get heroics, some good one liners, and a lot of decent special effects. All this makes up for whatever shortcomings there are in terms of script and acting. Blood Vessels knows what it is, and what its audience wants. And I thank Dix and company for that. It looks good too, with a great colour design highlighting the reds in contrast to the blue and grey everything else.

Pretentious of me to notice that, no? Oui!

Blood Vessels is best enjoyed over a few pints on a Friday night. On that level, it's a Good, and I recommend it as such.