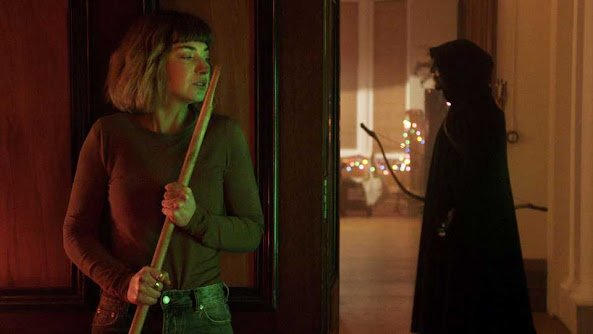 How bad? It has good intentions with its social commentary, and takes broad swipes at campus rape culture and how university classes largely tout the works of white men, white-male hierarchy and promote misogyny. And I agree with the film on all counts. Point made.

While Sophia Takal clearly has a feminist agenda, what points she makes become lost in the film's apparent hatred of men. All men. Every male character in this movie is evil, incompetent, or just plain ineffectual and unlikable. I get it, guys are dicks. I'm one of them, and my wife can attest to that. But come on; we're not all evil beings out to keep women submissive.

There's even a scene where one of the male characters tries to tell his girlfriend, and her friends, all men aren't rapists. She yells at him, says she doesn't know who he is anymore, and kicks him out of the house.

He was one of the nicer guys in the movie.

The film completely loses the plot in a late third-act plot twist that makes little to no sense, and further harms whatever good intentions Takal and company went in with. Even my wife rolled her eyes and gave up at that point.

As a remake, this has little to do with Bob Clark's classic other than the campus and holiday settings. And the horror elements are as bland as a PG-13 remake can get.

Modern filmmakers need to leave Clark's classic alone. It's smart, atmospheric, and scary. Olivia Hussey's Jess is a strong willed, independent, and clever hero who stands up to a domineering boyfriend, who is proven to be little more than a fragile prince. She's a far better female role model than any of the characters in this movie, and the original film delivers a more powerful feminist message than Black Christmas 2019.

This version is an Ugly.