Review: The Wolf of Snow Hollow 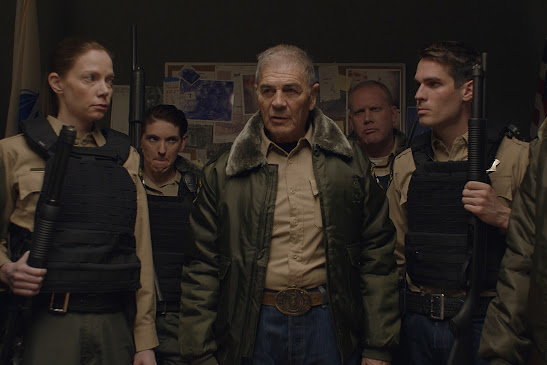 A lot of critics, I'm assuming the allegedly "woke" (hate that word) kind, are calling The Wolf of Snow Hollow a breakdown of toxic masculinity. Sure, read into it whatever you want.

The main character -- a small-town sheriff with a failed marriage, rebellious daughter, alcohol addiction, and anger issues -- is certainly the stereotype of toxic masculinity. And writer/director/star Jim Cummings is definitely poking a bit of fun at the action hero of the 80s. But I wouldn't call the performance, nor the film, a breakdown.

In our too-PC world, we look for political messages in everything, whether they're there or not. I'm not sure what Cummings intended when he made The Wolf of Snow Hollow, but what I saw was a horror/comedy having fun with 80s horror-movie tropes, and playing within -- and then breaking -- our expectations.

I've been doing this for a long time -- too long, maybe. I'm not saying said "woke" critics are wrong. This is just my interpretation and my opinion, which I'm allowed to have, as are you. Can't we all just get along?

Cummings has indeed made a fun film, one I laughed at a lot, and one that delivers its share of creepy and intense moments. It's brilliantly written, directed and acted by Cummings, who is backed up by a strong cast, including Rikki Lindhome, who is a far more competent sheriff than our hero, and the late Robert Forester.

As for the beast: much like in Stephen King's Cycle of the Werewolf, Cummings give us several red herrings as to the alleged lupine's identity. The reveal isn't as important as the ride, although the way things play out certainly surprised me.

The Wolf of Snow Hollow is a must watch, in my worthless opinion, and one I can't recommend enough. It's a Good, and one of the year's best.