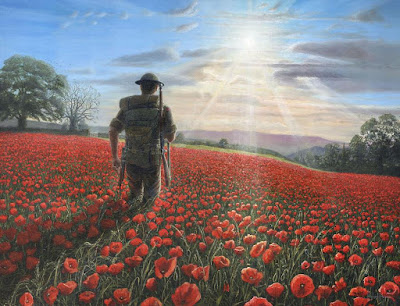 Today is Remembrance Day.  A day where we mark the Armistice that ended World War One, and honour the soldiers that fell on the battlefields of various conflicts across time and the world.  People will be wearing poppies, and taking a moment to quietly reflect on the sacrifice made by the soldiers who have been lost to war.

And a special poem will be read across the land- causing those that hear it to stop, and think, and offer a silent prayer for the souls still buried in the fields where they died.  That poem is "In Flanders Fields" by Lieutenant Colonel John McCrae.

LCol McCrae was a Canadian soldier that fought in the Second Battle of Ypres- in Flanders, Belgium, actually.  He survived one of the first chemical attacks at that time.  After the attack, when he performed the burial services for his friend Alexis Helmer, McCrae observed that poppies grew quickly around the graves of the slain.  This is what inspired him to set pen to paper, and write the now famous poem:

In Flanders fields the poppies blow
Between the crosses, row on row,
That mark our place; and in the sky
The larks, still bravely singing, fly
Scarce heard amid the guns below.

We are the Dead.  Short days ago
We lived, felt dawn, saw sunset glow,
Loved and were loved, and now we lie
In Flanders fields.

Take up our quarrel with the foe;
To you from failing hands we throw
The torch; be yours to hold it high.
If ye break faith with us who die
We shall not sleep though poppies grow
In Flanders fields.

On this day, let us all stop, and give silent prayer and thanks to all the service personnel who risk their lives in war and peace time so that we can live free- with the hope that one day, war will never come again...