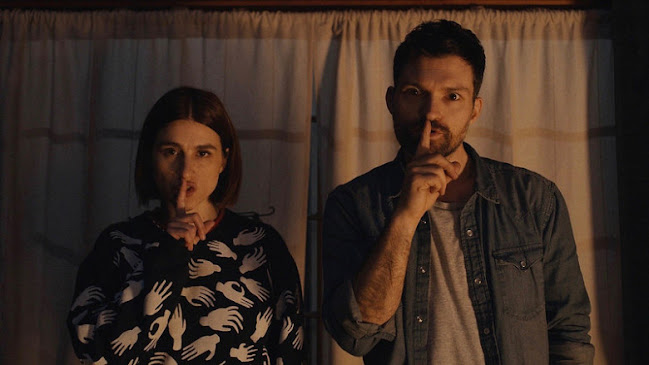 Scare Me is not the movie I expected it to be, and that's why I enjoyed it so much.

Written and directed by co-star Josh Ruben, Scare Me is about two writers -- one successful, the other much less so -- who find themselves together at a cabin in the Catskills during a power outage. To pass the time, they tell each other scary stories.

On the surface, this sounds like the premise for a horror anthology, and it is, but not in the usual way. Instead of cutting to a movie within a movie when the storytelling starts, we stick with Ruben and co-star Aya Cash, who act out the tales they're telling with some subtle, but effective, visual and audio tricks to help them along.

Now, Scare Me isn't scary... at least for the most part. But it is a lot of fun to watch. Ruben and Cash are the movie, and its success is all on them. They provide lively, likable (even when their characters aren't), and plausible performances. Had they faltered, the movie would've fallen apart. They didn't, so it didn't.

Chris Redd has a small part as a pizza delivery guy who gets in on the storytelling, but he gives the role his all, and matches Ruben and Cash's intensity beat for beat.

A few points are made at white-male fragility, but they don't get in the way of the storytelling. Which can't be said about most attempts at putting a political agenda into popular entertainment. If anything, this movie reminded me of telling stories around the campfire as a kid, and I loved it on that level.

Scare Me is a unique twist on the horror genre, and a fun one at that. It's not for everyone, but I'm giving it a Good, and adding it to my annual Halloween viewing roster.