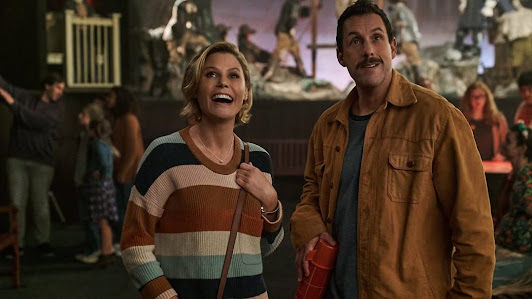 I'm admittedly a little late to the party when it comes to chiming in on Adam Sandler's latest comedic vehicle, the Halloween-themed Hubie Halloween. That's primarily because I've never been a huge fan of Sandler's antics and this flick, which is very much a throwback to his earliest efforts, just felt out of place in today's times.

But, after Shawn railed against Hubie Halloween on last week's From The Basement broadcast (he turned the film off after five minutes), I decided to check it out. I just had to see how bad the movie is.

Hubie Halloween does get off to a shaky start, and I too wanted to turn it off after five to 10 minutes. All we get at the outset are people being mean to Sandler's simple minded Hubie Dubois, and that got old fast.

But once things slip into gear, and Hubie sets out to save his town from not only a potential werewolf, but a Michael Myers-like serial killer, the film won me over. Hubie Halloween ended up being funny, and it had something to say about kindness winning out over hate, and accepting people for who they are.

That's right, much like Fat Albert and the Cosby Kids, I wasn't careful, and learned something before I was done.

Hubie Halloween is vintage Adam Sandler, and unashamedly so. It's goofy, often stupid, a little bit crude, but funny. And warm hearted despite itself. There's a sense of nostalgia too, as Julie Bowen (who played Sandler's love interest in Happy Gilmore) is back, and so too is Ben Stiller as his Happy Gilmore character. Plus Sandler regulars like Kevin James and Rob Schneider, not to mention his SNL pals Tim Meadows and Maya Rudolph, are present.

I've watched Hubie Halloween twice; once more me, and again with my wife and son. They enjoyed it too. So if you're looking for a goofy, family friendly watch this October, give Hubie Halloween a try. It's a Good.

Note: Shawn has some updated thoughts on Hubie Halloween on this Friday's episode!