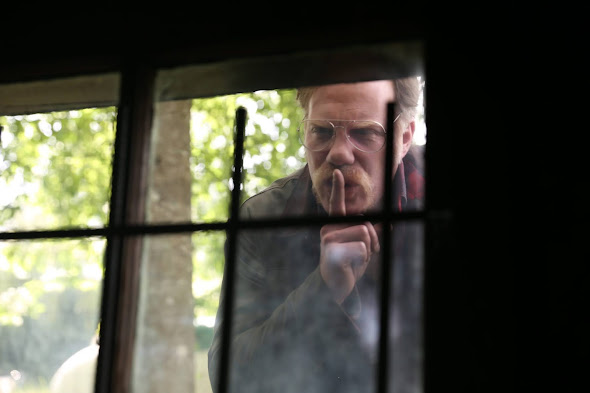 There's something to be said for a lean, mean horror/thriller. If you think about it, some of the best genre movies are the ones that cut all the bullshit and present a simple, scary story, and tell it effectively.

John Carpenter's Halloween was one. Steven Spielberg's Duel another. And that's just a couple. But I'd like to add director John Hyams's Alone to that list.

Perhaps best know for his well done Universal Soldier sequels Regeneration and Day of Reckoning, Hyams proves he has what it takes to make an effective chiller, focusing on character and technique to tell a scary story of a widower who is kidnapped by a serial killer and taken to his remote cabin. She escapes, and must not only survive him, but the elements.

A simple premise, but Hyams and screenwriter Mattias Olsson kill it -- if you'll excuse the term. This movie grabs you with an effective opening, which could have been a whole movie in its own right, where fragile Jessica (well played by Jules Willcox) is slowly stalked by the devious killer, Marc Menchaca, who gives a chillingly effective performance, while driving cross country. Hyams and Olsson slowly build the tension, eventually making Jessica -- and the viewer -- leery of every passing vehicle.

Alone kicks into high gear once we reach the cabin, and the cat-and-mouse game that unfolds is scary, brutal and visceral. Hyams can shoot action, and those skills come into play here, exploding in a violent final conflict that had me on the edge of my seat.

As I said, Willcox and Menchaca are great, and play off each other well. Willcox's character goes through a great on-screen character arc that's 100 percent believable. And Menchaca... well... he's got a backstory that makes his killer all the creepier.

This is a great horror/thriller, and one I'm glad I stumbled across. And it's not just solid Halloween viewing either. See it. It's a Good.