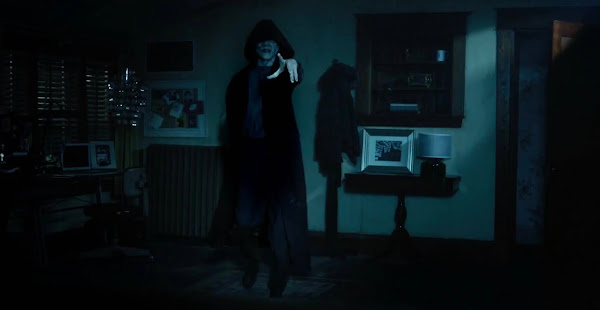 Any aspiring filmmaker should watch The Bye Bye Man (2017). I mean it. Because if this piece of shit can have any semblance of success, there's hope for anyone wanting to break into the business.

This god-awful film is chock full of amateur mistakes, uninspired tropes, and cheap jump scares. It doesn't have a single inspired bone in its body. The only positive in the movie -- its kinda neat concept -- is wasted on the most generic script.

On top of that, we've got the most lifeless characters spearheading this story. Everyone in this movie is a single-word stereotype with the depth of a puddle, so you could care less about them. I don't blame the actors here either; they had virtually nothing to work with.

What really does The Bye Bye Man in, though, is the monster isn't consistent. Sometimes he can't physically interact with the environment around him, and other times he can. His lore isn't effectively set up, or hand waved, so you're just left confused by him the whole film.

And really... Bye Bye Man? That's the name you went with? Are you trying to sound like every shitty Creepypasta written by a 13 year old?

Now, for all I've said, there is still enough fun to be had here... so long as you have friends and sufficient booze. Have a roast party and laugh at this dumpster fire of a horror movie. This one is an Ugly.