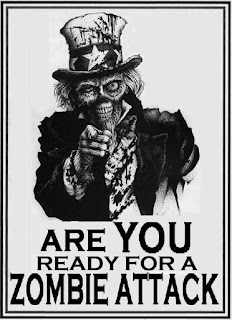 The zombie apocalypse.  Hoardes of the dead rising from their graves to feast upon the flesh and brains of the living.  We've seen the progression- from "Night of the Living Dead", through it's dawn, and day until the world is the "Land of the Dead".

So, yeah- we all know it's coming.  The question is: "What do we do when it comes?"  Well, here's the answer: "Max Brooks' 'The Zombie Survival Guide', that's what."

This book, though obviously tongue-in-cheek, could very well be an honest to goodness survival guide.  It is well thought out, clear, precise, and logical in its approach to how one could survive a mass uprising of the feasting dead.

"The Zombie Survival Guide" covers the "known facts" about zombies, creating a credible background to the rest of the book.  With that done, it goes into how to prepare for an approaching increase of zombie activity, and then into what to do when the zombie apocalypse officially starts.  Using a simple, easy to follow format, Brooks breaks things down into categories covering everything from fortifications, clothing, weapons, vehicles, escape and evasion, defence and offense, and even the advantages of short hair over long.

There are also illustrations that are VERY much like those you find in actual survival guides- and remind me of many of the manuals I read during my time in the military.

Fans of zombie films will enjoy this collectible book, and even non-fans will probably get a chuckle, as well as be impressed by the thoroughness and the intelligence behind this unique book.

We all know it's coming- and thanks to Max Brooks' "The Zombie Survival Guide," I'll at least be prepared and able to survive zombie uprising... which makes this book part of "The Good".