Halloween Day by Day: "The Werewolf vs Vampire Women" (1971) 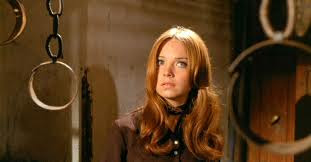 Two of the creatures of the night that seem to be pitted against each other in horror movie are werewolves and vampires.  This was no different back in the 1970's than it is now...Elvira and Genevieve are searching for the grave of a medieval murderess and alleged vampiress when they are stuck in the middle of nowhere.  Fortunately, Count Daninsky lives nearby in a secluded castle.  He offers to help them search for the tomb... but only because within it may lay the key to curing of his curse.  It seems the Count is an immortal werewolf...

"The Werewolf vs Vampire Women" (original title, "La Noche de Walpurgis") is a Spanish horror film that helped to create a horror movie boom in Spain.

The premise is actually one that kinda makes me shake my head.  Not because it's stupid or anything- but rather because such pairings tend to lead to a rather silly movie.  And when one stops and examines this movie, it is rather silly... or course, that could be partly because the US version was heavily cut.  There are some large holes in logic on the part of the Count and the others.

I did find that I liked most of the characters.  The Count is charming and a decent guy under all the fur and wolf slobber, and Genevieve makes a good companion for Elvira.  The Vampiress Wandessa is a decent villianess as well.  The only character I had some problem with was Elvira- the heroine.  It was the sudden turn she took from not trusting the Count to being in love with him overnight.  Bothered me.

The acting was pretty good, though some of the lines the actors had to deliver were a little silly.  Paul Naschy as the Count was quite good.  He was able to bring charm and pathos to his werewolf cursed character.  While I had problems with the character of Elvira, I felt that Gaby Fuchs was not only beautiful as Elvira, but did a passable job in the role.  Also beautiful was Barbara Capell- who played Elvira's friend Genevieve.  Capell brought a nice touch of character to Elvira's best friend, and a really seductive  aura to her vampiress portion... even with the huge ass fangs she had to wear.  I also through that Patty Shepard as the Vampiress Wandessa was superb.  She was beautiful, mysterious, ghostly, and seductive.

The camera work doesn't really stand out as being what I would call exceptional.  They furthest they go with special effects was to slow down the film during the vampiress segments in order to make them seem more etheral and dream-like.  While simple, and standard, it did the job and was effective.  The sets were also rather standard in terms of European horror films of the 1970's.

For a night of vampire and werewolf movies, I wouldn't hesitate to include "The Werewolf vs Vampire Women", but I wouldn't go out of my way to re-watch it.  Because of that, I'm placing it in The Bad.