Halloween Day by Day: Top Five Time Periods to Base a Horror Movie On 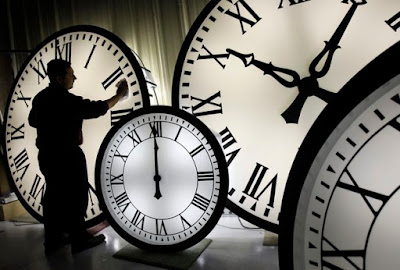 Humanity has had an obsession with time since they first saw the sun rising and setting.  They have tracked it's course across the sky, and created smaller and smaller units of measurement to do so.  They have sought to stop time, and speed up time, and even reverse time.

What follows is my Top Five Time Periods to Base a Horror Movie On.  Just remember though:

Time... time is inevitable.  Time is infinite.  Time is coming for you...

1.  Middle Paleolithic:  This is the time period in which modern humans (Homo Sapiens) started to appear and spread across the world.  Multiple human species co-existed, leading many early researches to think there was a missing link between them that lead to ours.  But... what if... that "missing link" was actually a werewolf species?

2.  The Black Plague:  Between 1347 and 1351, killed up to 200 million people across Europe, Asia, and Northern Africa.  It was a horrific and gruesome disease to die from.  But what if... it wasn't actually a virus... but an alien parasitic lifeform?

3.  The American Revolution:  In 1765, the United States began a war to become free and independent from the rule of the British Crown.  As part of their struggle, the American militias used guerilla tactics to balance out the sheer number of troops the Redcoats had.  I have to wonder what would've happened if there was a 3rd party involved in the fighting as well?  The forces of First Nations legends attempting to protect a local tribe from being over run by American and British forces?

4.  World War One:  The first and second world wars are horror stories until themselves in many cases- from the fighting conditions to the inhuman atrocities performed.  But what if... one of the unrecounted battles involved two lost platoons- one Canadian, one German, having to join forces to fight the dead rising up from the ground?

5.  The Great Depression:  World War One created the foundation for what would be called "The Great Depression".  More and more neighbourhoods devolved into slums, people grabbed shelter where ever they could- often gathering in large groups in "shanty towns" and abandoned buildings as squatters.  Drifters were frequent, mysterious, and often unidentifiable.  Crime was rampant, with murder and disappearances commonplace.  This sort of environment would be the perfect setting for a vampire to move in... and start stalking a population that nobody would notice was dwindling...

So, there you have it-  five time periods I'd love to see as the basis for a horror movie?  How about you?