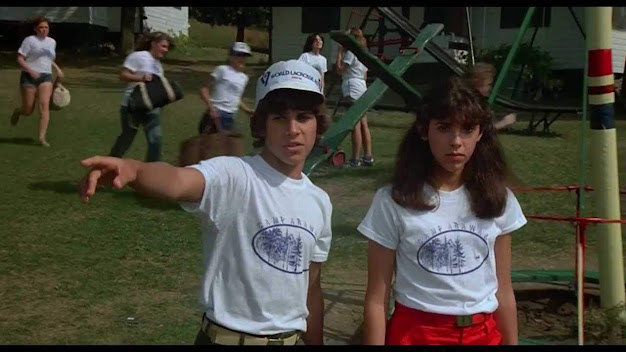 There was a time when going to summer camp was a common thing for children to do.  They got to socialize with other people of their ages, the parents got a few weeks of quiet to themselves... and a psycho was gainfully employed killing them...

Angela and Ricky are sent to Camp Arawak for the summer.  Angela, unfortunately becomes the target for bullies.

When those bullies start to die...it becomes clear that someone has a lust for blood... but who's doing it- and who'll be next?

"Sleepaway Camp" is one those films that can- by many, be considered a "guilty pleasure".  You know you shouldn't enjoy it that much... but you do.

But is it any good, though?  Well, on the surface, it's rather shallow.  At first viewing, it reads and looks like a cheap knock off of "Friday the 13th".  But, on closer viewing- and contemplation, there is a fair bit of depth to it.

Especially if you view it through the lense of being a trans-narrative movie.

The story is pretty basic for the genre back in the day- campers + killer = movie.  It's when you consider that transgender element that it actually becomes a much more interesting movie.  Those in the LGBTQ+ community could probably relate to the ostracisation, harassment, and bullying that Angela goes through- as would most teenagers.  There is also the sense of empowerment that comes when her bullies start to get dealt with- a standing up for her right to the person she is, and her right to live her life without being ashamed.

The movie is all about Angela.  Her past, and her present- the reality of who she is.  She is shy and introverted; quiet and tries to move among people unseen- reflecting what Society would like the LGBTQ+ community to be in general.  But she's also comfortable with who she is.  She's not confused at all- she's Angela.  Pure and simple.  She could be a metaphor for the community finally stepping forward and declaring that they exist, and aren't about to "go away".

So, the story and character are pretty deep and thematic on closer examination... but the execution takes some of the shine off of that philosophical gold.  Let's be clear- this movie wasn't made in order to be a positive narrative regarding trans-individuals.  That element- as evidenced by the twist ending was intended to shock and horrify the audience; to use the nature of transitioned people, and Society's prejudice against them to repulse the audience.

While "Sleepaway Camp" has been embraced by many within the LGBTQ+ community for being a "milestone" movie (a rare one with a trans protagonist), it is still at it's core an exploitive movie.  It exploits the audience's bias against the community to scare and disgust them- rather than make them ponder what it's actually like from Angela's point of view.  With the modern lense of trans-narrative, the movie has some depth.  Without it, it's pretty standard fare.  Either way, it is worth at least a single viewing- so it falls into "The Bad".