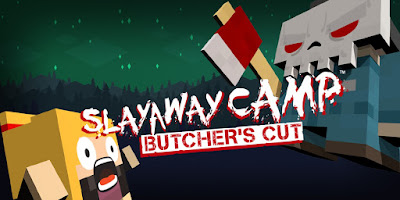 I love to play video games- especially horror themed ones.  I especially love when the game pays homage to classic horror movies, while having a bit of fun with it.

You are a masked killer at the titular "Slayaway Camp".  Your objective is to move around the map and kill the campers, cops, etc.  The mechanics are easy.  You can only move in a straight line until you hit an obstacle, so you have to chart your course using the obstacles.  You can get some "special" kills by scaring the victims into "traps" (holes, fire, water, etc).  You can also use the environment at times- as in the case of toppling a book case on a hapless camper.

But you need to be careful that you don't run straight into a trap yourself- you end your "turn" in a cop's target spot. 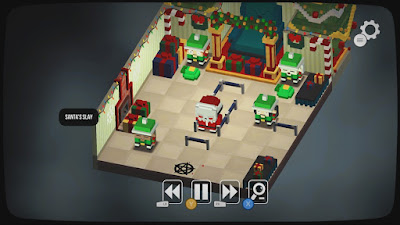 And that's it.  It's a simple enough game that can provide a nice mental work-out as you plot your moves.  I would imagine horror loving chess players would probably really quite enjoy this game- though as a casual player, I quite enjoyed it too.

The series of maps are divided into "movies".  You can unlock the sequels and other movies as you progress.  You can also unlock various kills-and skins for your killer.  The default killer skin- Skullface is a wonder homage to Jason Vorhees and Michael Myers. 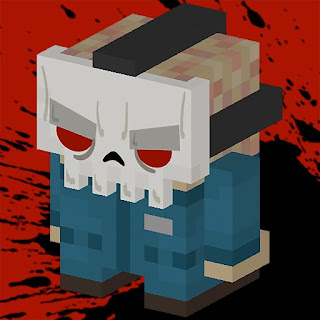 The art style is fun and whimsical- contrasting nicely with the "gorey" nature of the game.  The special kills you unlock are worth a chuckle, and are a nice tribute to some of the classic ways our favorite psychos have killed people in the movies.

My only wish is that there was actually some storytelling in between the maps- especially since the map sets are called "movies".  There's a starting cut scene, but not much in the way of story afterwards.  I feel that such a feature would really add to the fun and enjoyability of this game.

Despite that one complaint, I would have to say that Blue Wizard Digital and Stage Clear Studios have produced a simple, but enjoyable game that serves nicely as a way to give your brain a bit of a work out, and divert it from the troubles of the world,  I'm going to go back to playing "Slayaway Camp: Butcher's Cut" after giving it a bloody "Good".