Halloween Day by Day: "The Servants of Twilight" (Dean Koontz) 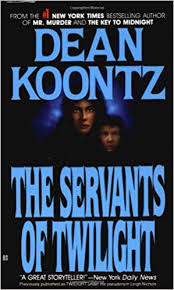 Horror literature has been with us for almost forever- from tales about vengeful gods making it thunder, campfire stories about the beastie in the trees, to books about fanatical cults.

Some horror authors seem to have been with us for almost forever too- from Bran Stoker, to Mary Shelly, to Stephen King, to Dean Koontz...

Christine Scavello and her six-year-old son are accosted by a strange old woman.  "I know who you are," she snaps at the boy.  "I know what you are."  A scream, a threat- and then a grotesque act of violence.  Suddenly, Christine's pride and joy, her only son, is targeted by a group of religious fanatics.  They've branded him the Antichrist.  They want to kill him.  And they are everywhere...

Dean Koont's "The Servants of Twilight" was my introduction to his writing back when I was in High School.  He was being hailed as the "next Stephen King", and this book was evidence of his skill.

The story is tightly written, and quickly paced, building up tension and suspense before releasing it just enough for you to feel safe again.  He also takes an unlikely scenario, and makes it all too plausible.  The characters- Christine, her son Joey, and Charlie- the detective hired to protect them, are unique, interesting, and emotionally engaging.  You get carried along on their journey to confront the cult targeting them, and you root for them.