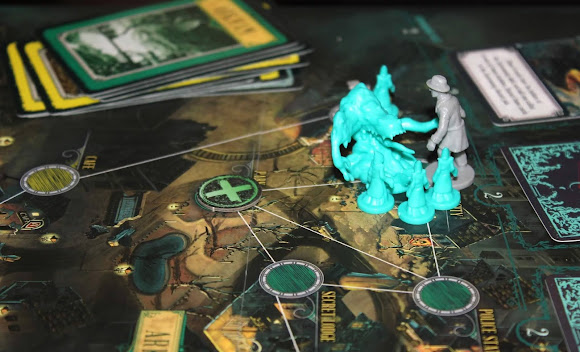 Across the ages, humans have entertained themselves by creating games.  Some games were designed to pass the time and challenge ourselves when we're alone, some were created to bring people to compete against each other while giving us a chance to socialize, and some were even created to challenge our ability to work together for a common goal...

It is a time of fog and shadows.  Under the waves of the sea, and within the billowing clouds, things are stirring.  People are disappearing, and inhuman "things" left behind.  The buzz and hum of insanity and chaos grows ever louder and nearer as The Time of The Old Ones approaches.

Can an intrepid band of paranormal investigators save Reality from The Great Sundering?  Can they save themselves?

Z-Man's "Reign of Cthulhu" is a co-operative game in which up to four players try to work together to seal the "Gates" in four towns before Cthulhu is summoned by Cultists.  Players move around the board, draw clues that help seal the "Gates", use "Relics"... and sometimes accidentally awaken one of "The Old Ones".  IF they manage to seal all four "Gates", before Cthulhu's card is revealed, they win the game.

But there are more than one way to lose...

This is a wonderful strategy game that forces you to think quickly, and as a team.  Since there are multiple ways to lose (ie- all of the Cultist or Shoggoth figures are on the board; all four team members are driven insane; the Player Deck is depleted, etc) you must always beware aware of the entire situation.  There are so many vectors by which the world can be plunged into mind rending insanity that shift from moment to instant, players must not only be able to think several moves ahead- but be able to change tactics and strategy on a dime... all while communicating with each other.

I played through three times, and found it an amazingly challenging and fun game.  Each play through was different than the last one.  There are three different "difficulty settings", with the challenge actually getting harder with each one.  This is a great game for team building and strengthening communicating and planning with each other, since it's a vital skill that's needed in order to survive.

As the game progressed, and with the "Awakening" of each of "The Old Ones", I found myself getting more emotionally invested in the outcome.  I felt the weight of each decision and move on my mind.  It's an intense and thrilling game.

The artwork and figures are amazing- as is the HP Lovecraft setting of the game.  With locations such as Arkham, Innsmouth, Dunwich, and Kingsport, you can almost create your own story within the Cthulhu Mythos.  The board is beautiful- as are the cards. 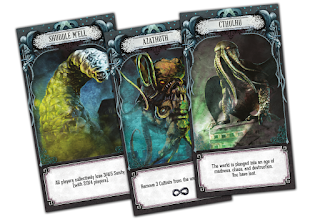 I also really liked the figures for the Investigators, Cultists, and Shoggoths.  Unfortunately, the version of the game I have doesn't have painted figures... but they are still nicely crafted, and add a wonderful feel to the game. 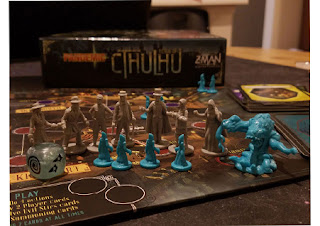 Each game takes about 40 minutes to play, and I found that that time went by pretty quickly- from both the in-game suspense, and lively discussion with the other players... especially if the players are willing to do a bit of role playing as their Investigator.  I myself, quite enjoyed acting like a hard boiled 1940's PI, or as an aging Vaudville magician.  It's best played with four players, I found as well, as it allowed for more options in regards to character interaction and insights.

So, why don't you pick up "Reign of Cthulhu" by Z-Man Games, grab some friends by the tentacles, and delve into an HP Lovecraftian world of madness and eldritch horror?  A spooky "Good" time will be had by all...