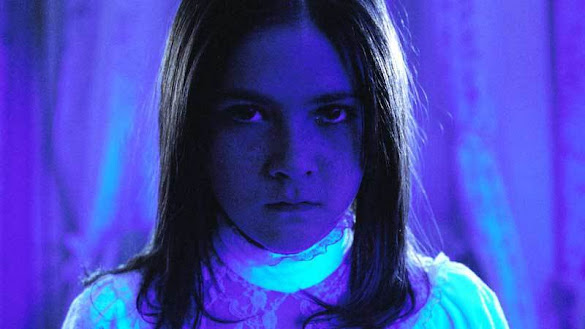 One of the surest way to get give people the heebie jeebies is to have a creepy kid in the movie.  "The Grudge" did it, "The Ring" did it... even Stanley Kubrick's "The Shining" did it...

The Colemans have adopted a young girl named Esther, who promises to bring some happiness back into the torn family.  Soon however, that happiness turns to fear as "accidents" begin to happen to those around them... with Esther at the center of the malestrom...

The premise reminds me a bit of "The Good Son " (1993), though there is an interesting, if slightly far fetched twist at the climax.

Other than the children Maxine and Daniel, there is very little to LIKE about most of the characters.  The husband and the shrink are idiots, and easily manipulated.  While you can understand the trauma and emotional problems the mother has, I found it hard to root for her.  In fact, I wanted Esther to win.  Esther was actually quite an interesting character- disturbing... but still interesting.

The majority of the acting was average, with only Isabelle Fuhrman as Esther rising up to give an above average performance.  She did rather good job of switching between sweet and psychotic.  The look on her face during one of the black light scenes was just unsettling.  She definitely makes my list of creepiest kids in a movie.

The camera work is also somewhat average, with only the black light scenes standing out as being creative and interesting- though the scene of her screaming and the camera vibrating was a nice shot too.

Overall, this movie is worth a single viewing- but only because of Fuhrman's performance, which puts "Orphan" in The Bad.