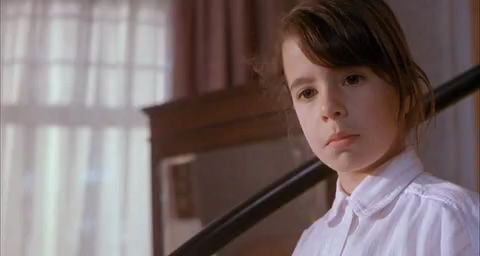 It's the last Wednesday of this spooky month- which bring us to the last movie in the "Omen" franchise- the 1991 Canadian made-for TV movie, "The Omen IV: The Awakening"...

Delia was an ordinary little girl adopted by the wealthy York family.  As she turns seven, dark things begin to happen to those around her.  Pain and death seem to follow her and those that come into contact with her.  Karen York is soon thrust into a battle of Biblical proportion as it is revealed that Delia isn't so ordinary after all...

"The Omen IV: The Awakening" was supposed to be the first of a series of made-for-TV movies in the series, but was the only one actually made.  The story isn't too dissimilar from the first movie, but has enough differences to make it an interesting and engaging one.  It's pretty tightly written and paced for a TV movie- especially for one from the early 1990's.  I couldn't find any plot holes, though there are strands that do hint at the fact that it was supposed to be part of an ongoing franchise.  To be honest, I wouldn't have minded if there WERE more made.

While the parent characters of Karen and Gene are in many ways the same as the Thornes from the first movie, they were updated enough to reflect the '90's suitably.  The real star character though is Delia.  I found her to be just an amazing and fascinating one to watch.  She really anchored the story, and engaged my interest in what was happening more than the others.

For a made-for-TV movie, the acting was pretty damn solid- though the best performance was from Asia Vieira as Delia.  She gave a truly chilling and unsettling performance as the spawn of the Antichrist.  I would say that her performance rivalled that of the original Damien, Harvey Spencer Stephen.  Just an amazing job that pulled me right into the movie.

While this isn't a movie I'd watch repeatedly, it is one that I would watch every couple of years as part of an "Omen" marathon.  The real draw for this movie is the performance by Asia Vieira.  IF there was one reason to watch it, it's her.  Satan is telling me to put this in "The Good".