It's the last Friday of October, which means there's just enough time for one last spooky drink before I need to start drinking "normal" craft beers again.  Which means... it's time to get dark... darkside dark... 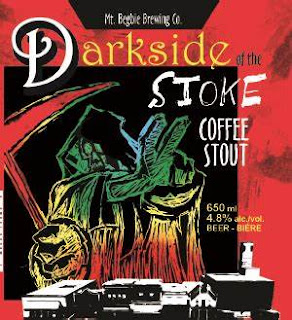 The label for Mt Begbie's Darkside of the Stoke is absolutely outstanding.  I love the combination of the sketched out Grim Reaper looming over the Banksey style stencilling of the town.  I also love the sort of "bruised" look of the Reaper that's created by the colouring.  It draws the eye to image in a nice, subtle and simple way.  The use of the black shapes on the stained red background creates a wonderful asymmetrical, yet nicely balanced weight to the label in general.  The mixture of the different fonts for the name of the brew is interesting and appealing.  In fact, this is the sort of label I would have no problem hanging on the wall of a "man cave" as a full sized poster. 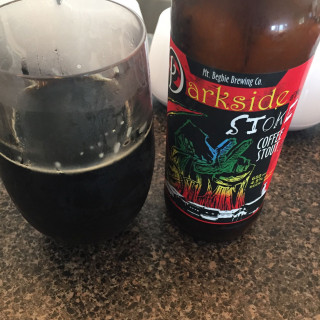 This brew has a wonderful, dark coffee colour to it- which is how I love my coffee... and my stout.  The depths are as dark and endless as death itself.  You could almost stare into it, and lose yourself in the infinity that is the darkside of the cosmos and life.  Unfortunately, like most craft stouts, it doesn't create or hold a head of foam like standard stouts like Guinness.  A nice, creamy head of foam would've been a nice topper and contrast to the deep dark abyss that is the stout itself.

To my long time friends- and readers, it's not secret that I love coffee.  And that I love stout.  As such, it's no surprise that I'd probably enjoy the two combined- which I do.  The first sip of this coffee stout was a nice, smooth one.  It didn't announce itself with a scare chord, or maniacal laughter.  Instead, it softly crept across my taste buds like the ghostly fingers of a spider web strand.  The coffee and the stout flavours danced gently and ethereally with each other to the quiet music of my thoughts.

Sometimes, the coffee was stronger then the stout taste, but would then drift away to let the stout tickle the base of my neck.  The mixture of coffee and stout was like an echo of the wind in the trees, or a flitting shadow caught in the corner of my eye.  Did I really just taste the coffee... or were my taste buds playing a trick on me?

Of the coffee stouts I've tried over the past few years, Mt Begbie's Darkside of the Stoke is the most subtle and unassuming.  I'd have no problem sitting down to carve Jack O' Lanterns, bake pumpkin seeds, or read an engrossing horror novel while sipping a bottle or two.  Sometimes, the Darkside is "Good".