Halloween Day by Day: "Maid of Sker" (X-Box One) 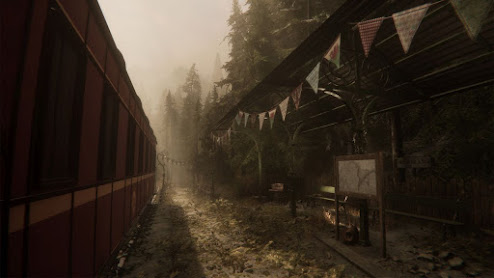 Back in the day, I discovered the "Point & Click Adventure" genre of games on the PC.  In fact the first game in the genre I played was "Lights Out: The Journal".  I remember playing it in a darkened room, moving through a beautifully creepy hotel searching for clues, solving puzzles, and find odds and sods that filled in the backstory of ghostly characters, and the desperate situation you found yourself in.

As game consoles became more advanced, such PC games like that sorta went out of style, and  became harder and rarer to find.

Until this month at least...

On the eve of your elopement with Elizabeth Williams, her father discovers your plans, and steals away with her to the isolated island of Sker.  He plans on forcing her to be the "Maid of Sker"- the lead singer at the Sker Hotel.

At her behest, you travel to the desolate hotel... and discover that her father's plans go further and deeper than keeping you two apart...

The story is very Victorian Gothic in nature, with a nice blend of Edgar Allan Poe, and HP Lovecraft.  It's intriguing, and the fact that it's told through your exploration, gathering of notes, and the periodic conversation with Elizabeth keeps you moving forward to discover more.  I only wish that there were more ways to interact with the surrounding- opening cupboards, desk draws, etc.  This lack of open exploration made the game feel very linear and restrictive.

I also would've like the occasional bit of internal monologue, so your character doesn't say a damn thing during the game.  He's almost as silent and "faceless" as "The Quiet Ones", you're trying to avoid.  There is nothing to create a real connection with him as he searches for his love.  Even when talking to Elizabeth, your part of the conversation is entirely text.

The game mechanics are pretty simple.  The sensitivity of the sticks is pretty twitch- you're often likely to send your character spinning in weird directions, while looking an different way.  I enjoyed the stealthy aspect of the game- but wished there was a way to tell how much noise you were making, and how much health you had, since there is no heads up display involved in the game.  An auto-save feature would also have been nice, as you can make a lot of progress, then die before you manage to find a save point... which is frustrating as hell.

While there are flaws with the protagonist, and game mechanics, the game is beautifully rendered, with an amazing musical score.  You could almost believe that you were back in late 1890's, exploring a haunted ruin of a hotel, while faceless creatures stalked you by sound.  The lighting and the sounds were just astounding and atmospheric.

"Maid of Sker" has a well crafted story, enhanced by beautiful, moody graphics, and eerie, subtle music and sound design.  It also has a pretty bland, under developed protagonist, and sometimes frustrating game mechanics.  If you were to play this game, I would actually recommend doing so on the "Safe Difficulty" setting, so you could focus more on the story, atmosphere, and effects, without being overly distracted by the "combat" and stealth elements.  A "Bad".