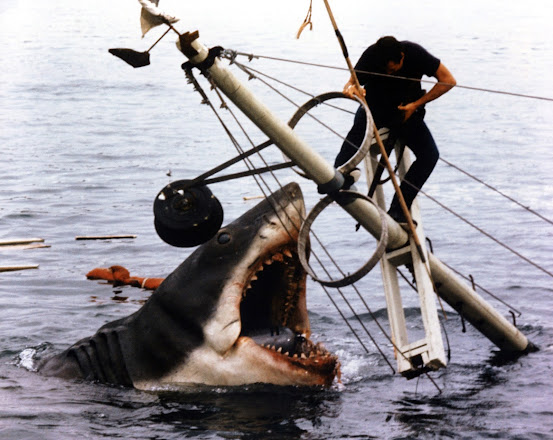 Aquaphobia is the fear of water- including the fear of swimming.  I myself tend to panic when I'm in water that's above my chin, and myself and members of my family will wear floatation devices if we want to go into the deep end of the family pool.

Galeophobia is the fear of sharks... which often contributes to people having Aquaphobia.

The small town of of Amity Island is a nice place for a weekend summer vacation.  Nice beaches, calm waters, shopping, and sharks.

When a great white shark invades the waters off of the town, the sheriff and an old sea captain must team up to hunt it... but what if the shark is actually the one doing the hunting?

This movie scared the living shit out of people when it was released.  Although, sharks aren't really known to go on a terror campaign against swimmers, the possibility- reinforced by some real-life shark attacks, were enough to send people into developing a fear of swimming.  It helps that the story is so well crafted and executed.  There are very few loose ends, or plot holes.  It is really tightly written, and fascinating in it's suspenseful build-up to the climatic confrontation.

The characters are also really quite well crafted as well.  Unique and different from each other, while still being relatable and likeable.  They are engaging and interesting- a combination that helps to keep you watching, and actually invested in what's happening to them.  You worry for them, and exalt when they triumph.

And the shark.  "Bruce".  What a masterful piece of practical movie magic.  The time, effort, skill, and talent that went into bringing this mechanical shark to wonderous life is astounding- and a reason for the crew to be proud of the accomplishment.  While today's CGI sharks might look more realistic, and move in a more fluid way, the "reality" of the shark's presence in its scenes are only enhanced by there being a physical animatronic for the actors to react and interact with.  One of the best examples of the sort of value that practical effects can bring to a movie.

So, dive right into the deep end and watch "Jaws"... it's a swimming GOOD time!