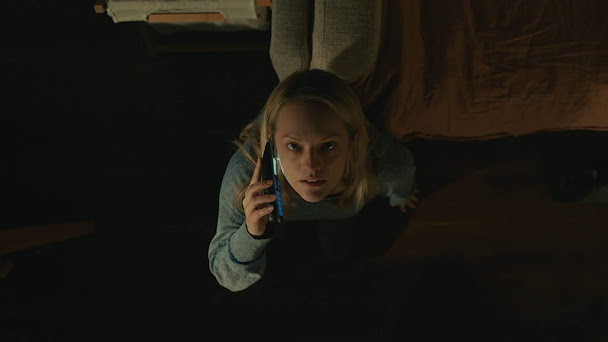 For some, however, they are stalked by unseen terror everyday of the year...

Cecilia has left her abusive relationship, and is ready to start a new life.  Soon, however, that new life is shattered when she becomes convinced that her ex is stalking her... and that he is invisible...

2020's "The Invisible Man" offers a modern take on the H.G. Wells classic, while taking advantage of the rising awareness and conversations about domestic violence.  Sadly, beyond that modern tech used, and the modern and relevant theme, this movie doesn't really offer that much.

The story plays out more like a drama than a suspense/thriller.  Any strength the story has comes from the number of viewers that can relate to having been in an abusive relationship, or had been stalked (my first relationship involved my being emotionally abused and stalked in fact).  Without the power of viewer's own experiences, this movie kinda feels flat and predictable.  Speaking for myself, I wasn't even able to find any sort of catharsis in the ending.  Poetic justice?  Yes.  A sense of closure?  Not really.

The characters are the same.  Cecelia only has the depth given to her by the experiences of the viewers who had gone through a similar experience trying to flee an abusive relationship.  Even then, the character themselves are a rather blank canvas for us to project our own experiences on.  There is actually, every little "character" to the Cecilia, and we learn very little about her during the course of the movie other than her having been a suburban girl drawn into an abusive relationship.  The only anchoring point of attachment to her is the shared experience of domestic violence given her by the audience.

In fact, ALL of the characters, the abusive Adrian, his weasley brother Tom, the cop James, her sister Emily, etc are just blank templates for us to project onto.  They all felt incomplete and just sketched out.

There is some nice camera work, a couple of the slow panning shots were able to send a bit of a tingle across my arms.  The rest is... well, rather standard for the genre.  Nothing overly new or innovative, or noteworthy.

I was left with a sense of disappointment in "The Invisible Man".  The best way I can sum it us is thus:  The story is see through, the characters transparent, and enjoyment dissipated.  An Ugly.