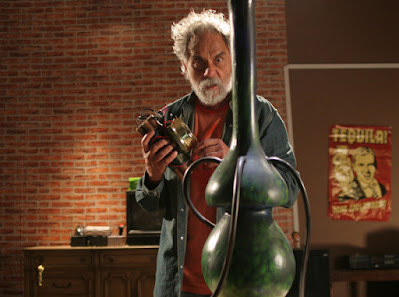 Cult classics are great films- and the horror genre is filled with them.  They usually use their humour and off-beat storyline to attract a following... sometimes with good cause.

Room mates, Alister, Larnell, Bachman, and Brett order a bong advertised as being "possessed," thinking it'd be cool.  Soon after its arrival, the four discover that this bong is more than it seems... and party time may go up in smoke...

I got this as part of an 8-pack horror movie set, and wasn't really expecting a whole lot from it.  I mainly wanted to see it because I curious about how they'd go about it... and because Tommy Chong- of Cheech & Chong fame was in it.  I can see, though why it's got the cult status it does.

There are a couple of decent character cameos in this movie though, all referring to other films by Charles Band:

There are also two other notable cameos by actors as well.  One is Tommy Chong- who is famous for the  stoner films of Cheech and Chong, and Bill Moseley, who has appeared in many cult horror films such as "House of 1000 Corpses", "Repo!  The Genetic Opera", and "The Devil's Rejects".  These two actually made their roles enjoyable- as did Tim Thomerson's quick appearance.  The character cameos of Ooba Booga, and The Gingerbread Man are a little disturbing... funny... but disturbing none the less.

Michelle Mais, the voice of Eebee, the possessed bong was good too.  She sounded like a voodoo cursed bong from New Orleans should sound in my opinion.

While the humour is fairly immature, there are moments that made me snort, grin, and chuckle with laughter.

Unfortunately, that alone isn't enough to make this movie a repeat performer in my collection.  I might pull it out on rare occasions where I'm getting drunk with friends... but beyond that, it's unlikely, I'll offer it up as a viewing choice in general.  I'm going to have to put "Evil Bong" in "The Ugly".